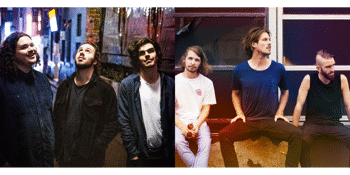 The Run & The Kite Machine

Come down and support local music and make a difference to those touched by the fires.

THE RUN Pairing captivating melodies with heartfelt and emotive word-craft, bolstered by in-your-face riffs and impeccable musicianship, The Run are a seven-piece soul/pop band that are a spectacle to be seen. Their debut self-titled EP made waves locally which lead to a nationwide tour, followed by a brief stint in Europe and an east-coast tour. Lead single of their follow-up EP "Everything You Want" stayed in poll position on Triple J Unearthed for three weeks leading to sold-out show at The Geelong Bandroom a month after its release. Early 2019 saw them break the record of highest number of payers to a show at The Workers Club Geelong with their 'Re-Run' mini-festival. The remainder of 2019 saw them support The Vaudeville Smash at Howler, jump aboard two regional tours with The Kite Machine and Hey Mammoth, and cemented their name at most well-known Melbourne and surrounding music venues. Their first single in almost two years, "Missing Out On", was released on all streaming platforms August 30th and the launch at Melbourne’s The Gasometer Hotel was a hit with their ever-growing Melbourne fanbase. The Run are now in the midst of preparing their debut full-length LP slated for release in late 2020.

THE KITE MACHINE�The Kite Machine are a Geelong based prog-inflected rock band formed by singer/guitarist Levi Anderson with Kane Sherriff on drums and Liam Brennan on bass. The trio have developed an international cult following amongst the indie music scene with tight jams, wry witticisms and manic riffs their signature. "Utterly addcitive... the whole thing is hardly tame." - Stef Italia, The Ripe. After a number of years riding the wave of acclaim given to previous single 'Charlotte' (+450k streams on Spotify) and 'Lunatics' (#1 Triple J Unearthed) the band recently announced their return from recording studio enforced hibernation with teh boot stomping track 'Sinister Sound' before embarking on a tour of South East Australia, selling out The Workers Club, The Gasometer and Halls Gap Hotel along the way. The band released their debut 10 track self titled LP in March 2019, rewarding fans with an album that showcases the full-spectrum of the talented 3-piece's unique style which combines explorative lyrics, complex time signatures and fuzzed up hooks packaged effortlessly with the uncontainable energy ever present in their live performances. "The band have developed a nasty habit of making what the people want." - Mike Hohnen, Music Feeds. Nominated "Best Regional/Outer Suburban Act" Music Victoria Awards 2019.