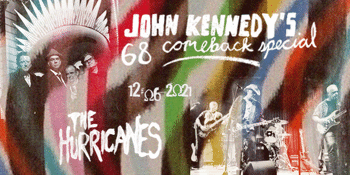 The Hurricanes have been kicking up a storm since 2012. Harry, Rob, Ian and Shame are forecast to again blow the roof off The Stag and Hunter on the 12th of June. Chiming, grinding, guitar interplay mated with flowing bass lines and precise, punchy beats adorn these original tunes, sung with passion, harmony and joyful exuberance. The sounds of Dick Dale-esque surf guitar on steroids, the thundering, chanting, foot stomping 70s glam rock of T Rex and Slade and the gritty groove of classic Rolling Stones combine to create a truly unique expression of everything The Hurricanes love about rock'n'roll. They may well throw in a couple of 60s rock classics too...they usually do.