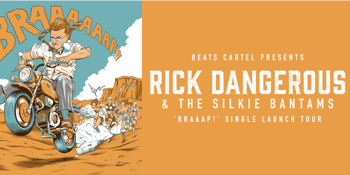 Rick Dangerous is polishing up his gold wing-tips and fuelling up the Private Jet this September for a 5-date single launch run for their latest release ‘Braaap!’.

Described as sexy, repulsive, abusive, and at best, obnoxious, the well-loved band bring their sordid lyrics and heavy grooves to a series of CoVid-free venues this September.  No stranger to the national scene and festival circuit, Rick Dangerous & The Silkie Bantams blew audiences away at the most recent Dead of Winter Festival and Mojo Burning and are back and ready to 'Braaap' in a run of limited capacity shows.

Extreme limited capacity get in early.  Thrust game set to 11.

Rick Dangerous and the Silkie Bantams appear at The Basement in Canberra on Saturday September 26.  Support to be announced.