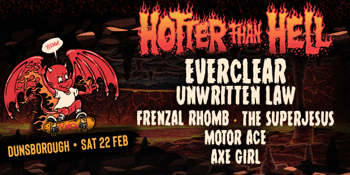 
The sizzling Hotter Than Hell line up has arrived in style, with 90s and 00s USA rock and punk royalty Everclear and Unwritten Law leading the announcement.

Everclear (US) head up the bill with memories of triple j Hottest 100 hits like 'Santa Monica' and 'Father of Mine' due to come burning back as Hotter Than Hell unleash their first ever international headliners. Previously laying low after a 14 year absence, Everclear last made an appearance down under celebrating their 20th anniversary tour in a string of hugely successful shows and return for the first time in three years to pump out their unique brand of singalong rock. Adding more fuel to the fire, multi-platinum punk outfit Unwritten Law (USA) heat things up in Mt Evelyn. The Southern Californian punk legends have endured with Aussie fans for their high energy live shows and distorted power riffs across favourites such as 'Celebration Song' to 'Seein' Red' and 'Save Me'.

A strong Australian contingent will make sure punters have 'never had so much fun' with Frenzal Rhomb jumping on board, bringing their supreme on-stage banter and guitar wielding goods along with them. Beloved Adelaide rockers The Superjesus warm things up with spicy hits and fiery guitar licks, while the punk rockers Cosmic Psychos play all your faves. VIC locals Chasing Ghosts provide local flavour on an epic scale to set the tone for the day.