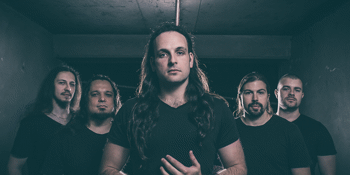 EYE OF THE ENEMY

Australian extreme metal veterans Eye Of The Enemy are bringing their new album, ‘Titan’ across the country this April.

Celebrating the release of their third and most ambitious full length album to date, the band is excited to take the stage once more unleashing their unrelenting and visceral live show to the masses.

‘Titan’ is the embodiment of everything Eye Of The Enemy has strived for since the band’s inception. An album entrenched in lyrical ferocity, riff laden mastery, melodic sensibility and a pummelling rhythmic force makes it a release worthy of the metal scene at large.

"Eye of the Enemy have unleashed a giant and imposing slab of melodic, groove-ridden heavy metal. Titan is suitably named.” - Loud Mag

"Eye of the Enemy have produced their strongest and most varied record to date, combining melodic hooks and atmosphere with a gut-wrenching vocal performance to be reckoned with” - The Rock Pit”

Catch Eye Of The Enemy on the following dates: