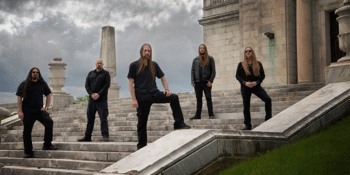 US Death-Doom Legends Novembers Doom are finally storming down to Australia and New Zealand in July 2020.

Novembers Doom are one of the foundational American Death-Doom bands and since their inception in 1989 the group have released 11 albums.

The band has been on quite a journey since their inception in 1989 when they began as a Death-Thrash band, eventually mutating into a more traditional Death-Doom sound and now morphing that into a more mellow and dynamic approach that touches on progressive metal - an approach they have described as Dark Metal.

Critical acclaim around their latest release "Nephilim Grove" sees the band at the top of the Death-Doom pack for many listeners and reviewers from around the world.

The Dark Metal masters will be joined by Australian/Japanese Progressive Doom Metallers Enough to Escape, suffice it to say - doom metallers across the Antipodes in for one hell of a show.

With Yukito 'Zaki' Okazaki of Eternal Elysium based in Japan and the rest of the Enough To Escape guys in Sydney the groups live shows are, as you can imagine, quite exclusive; their set is a punishing display of riff mastery and sonic misery that calls forth strains of Industrial Metal, Post Metal and Doom.

With their debut, Fortunes, out already, that sold out across Japan following their Japanese tour in 2019, Australian fans are hungry for the long-awaited tour ahead.

At no point does any musician in the band gain such an ego that other instruments are crowded out of the mix, and at no point is the overall direction of a track obscured by showboating. Novembers Doom is a well-oiled machine that has a foundational understanding of their own strengths and weaknesses, which they have proceeded to weaponize into a refined and unbreakable work of art.

With "Nephilim Grove," Novembers Doom has joined the small ranks of bands who have never put out a bad album.  It is an album that is an ode to the band's past, a sterling example of their present, a look at their still bright future. I have reviewed dozens and dozens of albums this year and I can say with utmost confidence that "Nephilim Grove," is a strong contender for my album of the year as 2019 winds down to a close.