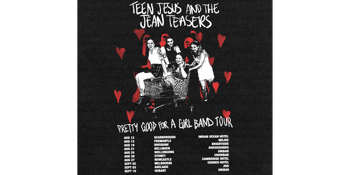 Announced alongside the searing single ‘Girl Sports’ (in honour of the male dentist that told bassist Jaida she should stick to “girl sports” after knocking her teeth out skating), Pretty Good For A Girl Band is Teen Jesus proclaiming they are a force to be reckoned with no matter their gender identity. For as much as there's a collective sense of self-assuredness among the band, PGFAGB attests that their success has come in the face of being undeservedly underestimated.

"'Girl Sports' specifically is basically a big middle finger to all the men that have treated us like we’re less than in the music industry and to call out of the losers that think it's okay to catcall women literally everyday. It's like a big GROW UP and treat women better cause we're just so sick and tired of it. We want everyone that has ever felt like this to have something they can belt out their frustration to," shares vocalist Anna Ryan of the  single.

Amongst the biting lyrics heard on 'Girl Sports', Pretty Good For A Girl Band at large is less about the group spitting pure frustration, and more about holding up a mirror and sparking reflection and constructive conversation.

“Despite the fact that we yell ‘fuck off’ a lot in ‘Girl Sports’, it’s not that we hate every man ever. It’s shit that this stuff happens to us, but we know where we stand and won’t let it get to us,” shares Anna. “It's also a broader educational moment because it's not only men that have said “you’re pretty good for a girl band” to me. I've had so many girls come up to me and say that or ‘I love this whole girl band thing you've got going on’. I’d like to think this EP can show anyone, ‘hey, if you've maybe ever said this or thought this, then we can all change together.'”

Embodying a quiet confidence and resolve like never before, PGFAGB is a powerful documentation of Teen Jesus figuring out who they are and voicing what they stand for. It’s the result of a band refusing to meet anyone’s projection of who they should be, how they should sound, and what they should say – and that especially goes for sexist dentists.