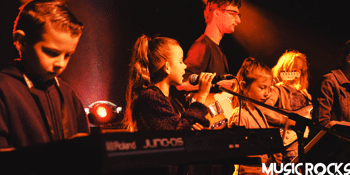 11th, 16th & 19th September 2021
Badlands Bar (PERTH, WA)
Sat 11 - Sun 19 September 2021 9:45 am
All Ages (minors must be accompanied by Guardian)
Music
Send this event to
Music Rocks Badlands sees Music Rocks Australia return to our favourite stage in and venue in Perth. More than 600 young musicians with 120 bands/solo artists in the Music Rocks Australia Ensemble and Individual programs on stage for more than 18 hours of music over three big days and 9 sessions of music.
The Concert will be spread over a week starting on Saturday the 11th of September, then the Allstars special evening on Thursday the 16th of September and ending on the Sunday the 19th of September.

‘Music Rocks’ brings the Western Australian community together with performances from the most elite young musicians in MRA All-star bands, primary schools, high schools, education support centres and community organisations. Young people living out their Rock Star dreams on stage in front of family, friends, and the most amazed and inspired public!

Performances will include those for WACE and WASSA certificates recognition for high school graduation, along with triumph for those supported by some of the biggest organisations in W.A. So many musicians will perform for the very first time with musicians as young as 5 years old achieving full Pop and Rock songs of their choice, swapping instruments between repertoire and showcasing the rapid and authentic power of the MRA teaching systems, unique to W.A. and supported by the famous MRA Ensemble Directors.

A not to be missed event for anyone close to an MRA musician and especially for anyone who is set to be amazed by the most courageous young people in W.A. – there is never a dry eye for what will be yet another series of sold-out shows J

The Session schedule is as follows:
Saturday 11th of September