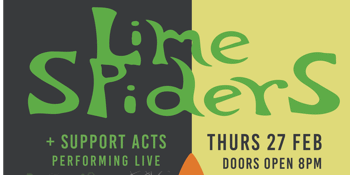 Lime Spiders - In Conjunction with Noosa Festival of Surfing

with special guests
Noosa Reef Hotel (Noosa Heads, QLD)
Thursday, 27 February 2020 8:00 PM
7 days away
18 Plus
Rock
Music
Punk
Send this event to
The LIME SPIDERS exploded into the unsuspecting ears of the music scene in the early eighties. From the band’s inception, its music was a compelling hybrid of ‘60’s punk/psychedelic influences in an uneasy marriage with a modern wall of sound approach. This perfect sonic storm was described by American Rolling Stone magazine as “the Sex Pistols on acid”.

Catch them performing live at Noosa Reef Hotel in conjunction with Noosa Festival of Surfing.