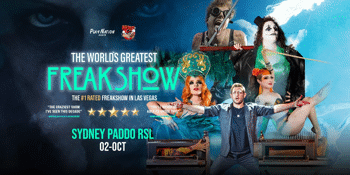 A production inspired from the HOLLYWOOD BLOCKBUSTER - The Greatest Showman and the very FIRST of its kind, A showcase of the world's most unique, jaw-dropping, and all rouund FREAKIEST performers, uniting these one-of-a-kind acts into a unique showcase of exquisite mastery. After taking Las Vegas by storm & sold-out performances in Melbourne it's now Sydney's time!

Showcasing a variety of acts that include Sam Powers, Samora Squid, Porcelain Alic, Sian Brigid, Aleksandra the Great & Miss Firby. Our rolling roster of the worlds freakiest 'freaks' will have you right on the edge of your seats performing stunts that defy human nature and mankind !!
Presented in collaboration by Play Nation Events & Big Deal Touring (the largest touring promotion company in the Southern Hemisphere) are two of Australia's most well-known entertainment leaders and industry pioneers.
"You won't want to look, but you won't want to look away!"
-Sam Righi, CEO, Big Deal Touring