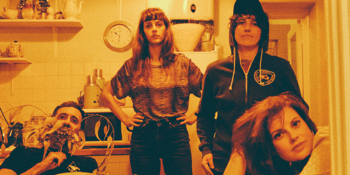 Please note: 10% of tickets for this show are half price. They're for people with a valid Australian Heath Care Card. If you buy a concession ticket, you'll have to show your Health Care Card at the door. Please don't try any dodgy bizzo, as we're trying to make our gigs accessible for everyone. If you have the money for a full price ticket, leave the concession ticket for someone who might not.
cheers.- TFS

"And, as you might expect from TFS, everything was only stone, fire, metal, silences in which we suddenly fall as in holes, hidden under a pile of dead leaves, and cavalcades more black and fierce than that of a thousand thoroughbreds fleeing the troughs of Sheikh Mohammed ben Rachid al-Maktoum on a moonless night.”  Liberation France