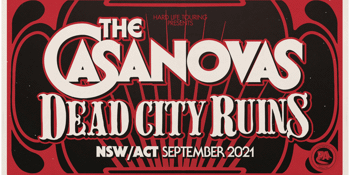 Formed in Melbourne in 1999, The Casanovas were founded on the enlightened but ambitious premise that it might be possible to embrace both the flamboyance and fun of KISS and the pub punk venom of The Dictators and The Powdermonkeys. Early on, their sound was described as AC/DC meets KISS with leanings to the 70’s New York punk sounds of such names as The Dictators and The Ramones. Although individually, they had many other influences that helped mould their sound. The Stooges, MC5, The Rolling Stones, The Saints, Dead Boys & Turbonegro just to name a few. Hitting The Road in September The boys will play a series of shows and will be bringing their hard rocking antics to Sydney's Legendary 'CROWBAR' supported by Melbournes Dead city Ruins and Sydneys Pub Rock Legends Rags N Riches!!!!!