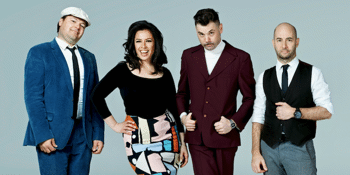 In true CO3B fashion, this show is set to be all live and full of vibe – with Ivan “Choi” Khatchoyan keeping those drum breaks tighter than a mosquito’s tweeter, Jake Mason making the Hammond swell and scream and Dan West twanging his guitar like a boss. Joining them onstage will be special guest vocalist Raleigh Williams, whose smokey vocals and dynamic performances have been setting stages ablaze around the country.

Shane Murphy from Melbourne’s The Daily Review described the CO3B Lab Experiments launch show as “…slick, taut and punchy…” and “…a must see… it feels like we’ve been transported back into a mid-60s Stax soul revue, audience sweating it out on the dance floor…” - high praise indeed!

Since its inception in 1997 Cookin’ On 3 Burners has continuously evolved and branched out, bringing their strong trio sound to collaborations with a variety of artists. The 2016 meeting with French electronic wunderkind Kungs resulted in the Kungs vs Cookin’ On 3 Burners version of their classic soul track “This Girl” which saw substantial chart success world-wide, reaching #1 in Europe, #2 in the UK and was the worlds most Shazamed dance track of 2016.