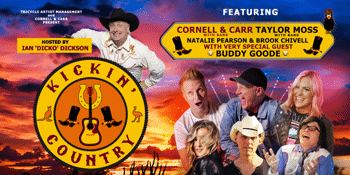 Multi Golden Guitar nominees Cornell and Carr and their band will headline supported by Local hero Taylor Moss and her band. Taylor is the most streamed Australian Country Female artist in 2021 so far.

Opening the show is Aus Country’s 'power couple' Natalie Pearson and Brook Chivell and if all that wasn’t enough, making his Queensland debut will be the outrageous comedy genius that is Buddy Goode, two time ARIA winner of best Comedy album.