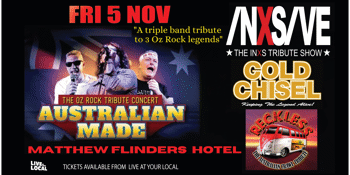 
The Matthew Flinders Hotel is proud to present:

"AUSTRALIAN MADE, THE OZ ROCK TRIBUTE CONCERT"' featuring INXSIVE, GOLD CHISEL and RECKLESS on Friday the 5th of November, paying a triple band tribute to three Aussie Rock legends INXS, COLD CHISEL and AUSTRALIAN CRAWL. This incredible lineup will appear live in the showroom in a full production concert, and is something that lovers of classic Aussie rock will not want to miss!!

*Tickets are now on sale via Oztix.  Secure yours now and get set for a massive night singing and dancing along to the music of these much loved bands!.....Doors open 7pm. Show starts at 8pm.

*INXS helped shape the Australian musical landscape in the 80’s and 90’s. Their infectious blend of dance/rock saw them conquer the music charts not only in Australia, but world wide. They built a reputation for staging electric and engaging live shows, fronted by their charismatic and talented front man, Michael Hutchence.....INXSIVE, the INXS Tribute Show were established in 1997 and reproduce not only the sound of INXS, but also the live show that made them as memorable as they are today. INXSIVE give every audience the opportunity to re-experience the inspiring, and proudly Australian music INXS created throughout their career. INXSIVE are an absolute “must see” for all INXS fans!

*Cold Chisel we’re unquestionably one of the finest and most respected rock groups in Australian history. The songs of Cold Chisel helped to form part of the Great Australian Soundtrack, with many of their songs being described as Australian Rock Anthems.....GOLD CHISEL perform these songs throughout venues across Australia and help many a Chisel fan relive the memories and the music of this classic band, and at the same time introduce these timeless classics to a whole new generation.

*Australian Crawl released the seminal "Boys Light Up" album in 1980 catapulting the band into the thick of the Aussie rock scene. They were a group of talented musicians that created timeless songs which still receive regular radio airplay today. Lead singer James Reyne followed up with a solo career that still speaks for itself.....RECKLESS, the Australian Crawl Tribute Show bring their extensive live experience into this tribute to one of Australia's most loved rock acts. With a theme of sun and surf and a reputation for quality performances, Reckless take their audience back to a time when they could go and see this iconic Aussie band sweating it out at their local pub venue, as watched as they etched their music into the hearts and minds of many a passionate Aussie rock fan...