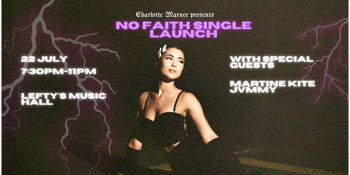 Charlotte Marnee debuts her first headlining show of the year with the official release of 'No Faith', the song that made her a finalist in Brisbane City Council's QUBE Effect.

Bringing the heat with her infectious stage presence and candy soul vocals, Charlotte is joined on stage with backup dancers and opening acts Martine Kite and JVMMY.

✨Charlotte Marnee’s sound is influenced by a mixture of Pop R&B / Soul contemporaries Ariana Grande, Tinashe and Summer Walker. Selling out her first ever headlining show at the classic Lefty's and starting this year off with a performance every 2 weeks, Charlotte is hot on stage and hot in demand. Capturing the attention of each crowd she graces with her candy soul vocals looped with choreography, Charlotte is excited to launch No Faith with her first headlining show of the year.

Martine Kite is a rising star influenced by a mixture of R&B, Afrobeats and Amapiano house music. Managed and mentored by Triple J favourite Carmoflauge Rose, Martine’s music speaks volumes in its diversity and innovation.

JVMMY, a Meanjin multi-genre artist and night scene favourite (Von Dutty, Mamba Beatz, ClosedOnSundays and more), is firing up the stage with his own set as well as DJing for Charlotte.