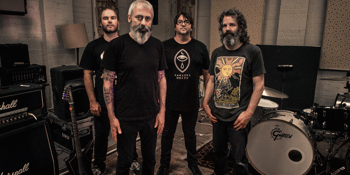 After a triumphant Australian visit earlier this year, New Zealand heavy act Beastwars return to Australian shores in February, spitting out a sharp three date run up and down the East Coast in support of new singleThis Mortal Decay.

With a new found perspective and deep understanding of the fragility of life stemming from vocalist Matt Hyde's recent battle with cancer, the band are back in world-class form and will return to Australia on the back of sold out shows at the Gershwin Room in Melbourne and one of the most mesmerising Dead of

Winter festival sets ever layed down to a packed 1500 strong crowd at the Tivoli in Brisbane, earning them a new army of Australian fans.

Promoting gargantuan new single ​This Mortal Decay,​ the introspective work was the last song written for latest Beastwars album ​IV and also the most triumphant, shaped by Hyde’s recent experiences delving into the abyss. ​​LISTEN

Beastwars' 4th album ​IV has been lauded around the world, debuting domestically at number 1 on the Top 40 album charts and seeing the band nominated for Best Group and Best Rock Album at the New Zealand Music Awards this year, a nomination they've amazingly earned for every album release.

"A thunderously heavy and life-affirming listen"​ METAL HAMMER UK
Be prepared to have your mind blown (again)... Beastwars are the real deal. This Mortal Decay 2020