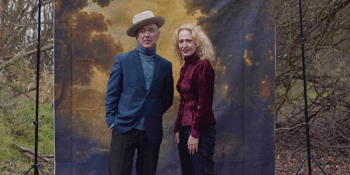 However they choose to play, they bring their story and their songbook which stretches to over 40 albums. They make shows like few others. During the initial Melbourne pandemic lockdown they started doing online shows every week, sometimes twice a week and revisited songs from all these albums as well as workshopping new material. They kept their performing nerve and playing and writing skills sharp. Then the lockdown eased and they played some shows around Australia. Then the lockdown came back again. Lucky their lockdown nerves held too.

They had been planning a rock album with their band, but times didn’t allow it so they made their own album in their studio. The duo’s album is a classic Compact Disc packed with too many songs for vinyl. It’s an album for the freaks called EVERYTHING WAS FUNNY.

They’ll be playing some of it – mixed in with old classics from their songbook – along with some choice interpretations of other people's songs in this late 2021 tour of Regional Victoria.

When people ask you in the future, “what was it like in those years 2020-2021?” You can begin by stroking your chin and saying… “weeelll… everything was funny”…

We acknowledge that the Wathaurong People of the Kulin Nation are the traditional custodians of the land on which The Barwon Club Hotel operates. We pay our respects to their elders past, present and emerging.