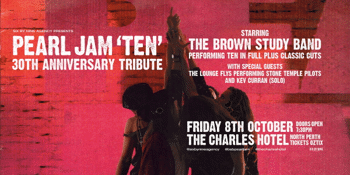 Released on 27 August 1991, Pearl Jam’s “TEN” unleashed the modern-rock classics Alive, Jeremy, Even Flow, and would go on to become one of the quintessential grunge albums of the 90s, and the inspiration for many aspiring rock bands ever since.

Pearl Jam’s first ever show took place on October 22, 1990 at the Off Ramp in Seattle under the name Mookie Blaylock, making the month of October a fitting time to celebrate one of alternative rocks greatest albums and bands.

For all THE BROWN STUDY BAND PRESENTS info and show dates visit:
www.facebook.com/bsbpearljam