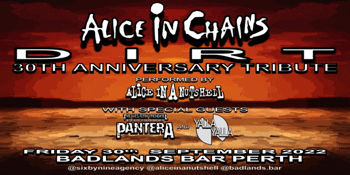 Perth’s only dedicated ALICE IN CHAINS tribute band, ALICE IN A NUTSHELL are set to celebrate the 30th ANNIVERSARY of AIC’s critically acclaimed second album “DIRT” at BADLANDS BAR on FRIDAY 30 SEPTEMBER, with special guests, THE WESTERN TRENDKILL performing the best of PANTERA and YALLA YALLA.

Alice In Chains' debut offering, Facelift, helped to catapult a nascent Seattle scene into the mainstream. By 1991, and the releases of Nirvana's Nevermind, Pearl Jam's Ten and Soundgarden's Badmotorfinger, the whole world had been introduced to this brand new genre: grunge, and it had taken on a life of its own.

But everything was just about to get darker – a whole lot darker – with AIC's sophomore record, Dirt.
(Alice Pattillo – Metal Hammer)

Released on September 29, 1992… Dirt is Alice In Chains major artistic statement and the closest they ever came to recording a flat-out masterpiece. It's a primal, sickening howl from the depths of Layne Staley's heroin addiction, and one of the most harrowing concept albums ever recorded.
(www.allmusic.com)

The album spawned five singles: "Would?", "Them Bones", "Angry Chair", "Rooster", and "Down in a Hole", all with accompanying music videos. Dirt was nominated for a Grammy Award for Best Hard Rock Performance. The music video for "Would?" was nominated for an MTV Video Music Award for Best Video from a Film, as the song was featured on the soundtrack to Cameron Crowe's 1992 film “Singles”.

With recent rockin’ appearances at Perth tribute nights, SCABSFEST, GRUNGEFST and FREAKS ON THE BEACH, ALICE IN A NUTSHELL are all set to pay tribute ALICE IN CHAINS legendary album, DIRT by performing it LIVE, in its ENTIRTY, plus a set of CLASSIC CUTS from Layne Staley era, ALICE IN CHAINS!

So dust off your Doc Martins and your finest flannel as we bang our heads to one of the 90’s greatest albums, “DIRT” by ALICE IN CHAINS!

For all ALICE IN A NUTSHELL show dates and info visit:
www.facebook.com/AliceinaNutshell