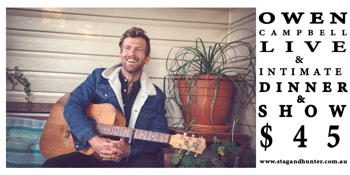 The Stag & Hunter Hotel (Mayfield, NSW)
Saturday, 14 November 2020 7:00 pm
91 days away
18 Plus
Dinner & Show
Music
Australian Artists
Send this event to
After 3 best-selling studio albums, 2 EP’s, and over 12 years of international touring, Owen Campbell has cemented himself as one of Australia’s premier alternative blues exports.

He has performed in many corners of the world, including the highest blues festival in the world - The Himalayan Blues Festival in Kathmandu Nepal.

Every album has hit the Top 10 on iTunes Blues Charts in over 10 countries. One of which - “Sunshine Road” - reached Number 1 on the overall charts (Australia) knocking Adele of the top spot in 2014.