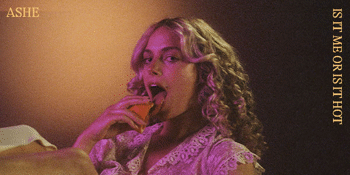 Like a character out of your favourite movie or a novel you can’t put down, Ashe possesses her own mystique rooted in quiet wisdom, yet amplified with vibrance and spirit. For as much as she embodies timeless California cool (northern or southern, take your pick), she’s got enough gusto and moxie to hang on the East Coast or down South. Musically, she slides untouchable hooks over dusty instrumentation, connecting Laurel Canyon eloquence with UK rock scope. After an injury sidelined her future as a gymnast, she immersed herself in music as a kid.

Attending Berklee College of Music in Boston, she kickstarted her journey with the single ‘Used To It’ in 2017 followed by The Rabbit Hole EP a year later. Teaming up with FINNEAS as producer, she reached critical mass on 2019’s Moral of the Story: Chapter 1 EP. The single ‘Moral of the Story’ appeared in NETFLIX’s To All the Boys: P.S. I Still Love You and exploded on streaming platforms, going platinum in the US and Silver in the UK.

Her 2021 full-length debut, Ashlyn, arrived to widespread critical acclaim from Variety, Nylon, Billboard, and more. Beyond tallying nearly 2 billion total streams, she took over television with performances on TODAY, Jimmy Kimmel LIVE!, American Idol, The Late Late Show with James Corden, Late Night with Seth Meyers, and The Ellen DeGeneres Show. Now, she turns the page on another chapter of her story on her second full-length album, Rae (out October 14 via Mom + Pop).

Don’t miss Ashe on her Is It Me Or Is It Hot tour this November!