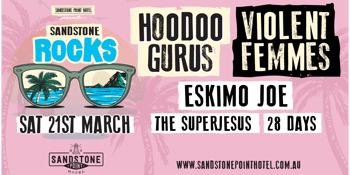 After induction into the 2007 ARIA Hall of Fame, Australian rock band Hoodoo Gurus reached iconic status in the Australian rock scene. Known for a string of acclaimed pop-rock singles including “Leilani”, “Tojo”, “My Girl”, I Want You Back” and more, they quickly became known as one of Australia’s most inventive, lyrically smart and exciting bands. Hoodoo Gurus are set to co-headline Sandstone Rocks with a performance well-worthy of topping the bill.

Finding immediate success with the release of their self-titled debut album in early 1983, American folk punk band, Violent Femmes set off on a career of epic proportions. Featuring hits “Blister in the Sun”, “Kiss Off”, “Add It Up” and “Gone Daddy Gone”, Violent Femmes became the band’s biggest-selling album which was eventually certified platinum by the RIAA.
Violent Femmes went on to become one of the most successful alternative rock bands of the 1980’s, selling more than 9 million albums by 2005.
Violent Femmes will be touring in 2020 after releasing their new 10th studio album ‘Hotel Last Resort’ and co-headlining Sandstone Rocks.

“Events at Sandstone Point Hotel sell out more often than not, it is such a unique concert venue and it’s no surprise people love returning. We were most recently the first Red Hot Summer venue in Australia to sell out and with such a big lineup for Sandstone Rocks in 2020, I don’t doubt tickets will be in high demand again. I am really looking forward to seeing the response and talent on the day!”

Set on Sandstone Point Hotel’s rolling greenery with a stunning waterfront backdrop, there is no better place to enjoy the sounds of some of the country’s biggest talent. With shows at Sandstone Point Hotel more often than not selling out, it is expected that tickets will go quick!