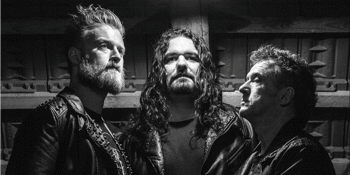 Lyric's Underground (Maylands, WA)
Saturday, 26 November 2022 7:30 pm
107 days away
18 Plus
Blues
Rock
Send this event to
VDELLI take the stage at Lyric’s Underground on Saturday the 26th of November following their European tour in September and October and their support performances for George Thorogood to start off November.

Michael Vdelli, front man and namesake of the band VDELLI, first picked up a guitar when he was 13 years old.  Locking himself in his room and learning how to play from listening to the radio, Michael has since become one of the leading exponents of his art in the world. Combine this with his raw yet captivating vocals, Michael's stage presence and energy continues to mesmerise audiences around the globe.

Joining Michael on the stage, are internationally renowned musicians, Ric Whittle on drums and Leigh Miller on bass who both have a string of accolades to their names. Together, this dynamic trio is a musical tour de force!

VDELLI have worked with some of the greats in the industry including the likes of BB King, Buddy Guy and ZZ Top. The band's two performances at Sweden Rock in 2012 and 2014 respectively, proved their ability to cut it on the big stage and beyond.

In 2010 VDELLI were picked up by German label Jazzhaus Records and have since released 6 albums under the Jazzhaus banner thus assisting to cement their place in the European market as well as back home in Australia. In 2014, the band moved to Hamburg, Germany, to keep up the momentum of their hard earned reputation as "One of the most ground-breaking groups in Blues Rock" (Classic Rock Magazine) intact.

The band remained in Europe until 2020 gaining growing audiences and glowing reviews until the pandemic hit. “The list of great Australian rock bands is long and goes from A, as in AC/DC, through C, as in Cold Chisel, and R, as in Rose Tattoo, to V as in Vdelli.” (Musix Magazine, Germany).

After years on the road and a string of albums to their credit, VDELLI returned home to Australia to wait out the pandemic. They have used the time in lockdown to get creative and produce what critics are saying is their most impressive studio album so far “NOW”.

“The Australian blues guitar master Michael Vdelli released his seventh album with “Now” Overall, the focus of the Vdelli blues - whether rocking or ballad-like - is the intensity. Vdelli has the blues and delights the listener. Vdelli again convinces with "Now". "Now" is impressive. "Now" is a highlight!” Joachim “Joe’ Brookes - ROCKTIMES.

“The Australian Michael Vdelli, who is hip in Europe, returns after five years with NOW and combines earthy hard rock, boogie and blues into a tasty and rousing brew. A multifaceted cocktail full of surprises.” Vincent Abbate - ROCKS MAGAZINE.

“The new album is a variegated collection of songs that utilize the blues genre’s entire expanse of possibilities. …Vdelli can efficiently and persuasively talk the talk… an inarguable display of musicianship and artistic focus, one that such a musical classification requires. …culturally and historically significant…” Vince Leigh - AROUND THE SOUND

“Sometimes hard, funky and grooving and at other times sultry and pumping. Michael Vdelli lets his guitar blaze hard with a scorching sound and his vocals reminded me in some songs of the bluesy voice of David Coverdale. Lovers of heavy blues rock work can note a new “must buy” with this new Vdelli album.” Peter Marinus - BLUESTOWN MUSIC