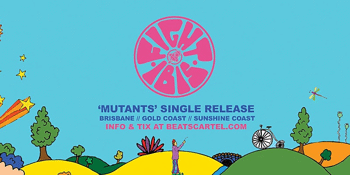 Born in a garage of The Sunshine Coast, Triple J Feature Artist Fight Ibis throw down a unique feel, encompassing all genres from Psych/Indie/Garage to unhinged-swing and groove, striving to create an honest body of work that brighten the listeners day.

The band release their latest track ‘Mutants’ on Wednesday October 07 with an accompanying QLD run of shows in Brisbane, Gold Coast and Sunshine Coast to showcase new material.

‘Mutants’ is the second single from an upcoming concept album, the Ibis having been on a roll with 7 Triple J featured tracks from 7 releases.

Kyuss Williams, lead singer of Fight Ibis says of the latest release “I wrote it about a year ago when i heard someone talking under my bed on tour… I thought it was the Bogeyman. Turns out it was just Dayle on the phone when we were in bunk beds.”

Catch Fight Ibis, back on CoVid restricted roads this October for, as per usual with these dudes, a super fun night out! Full tour and band info at beatscartel.com.