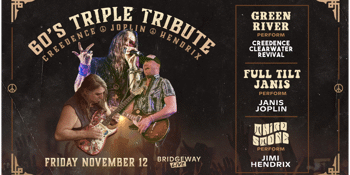 GREEN RIVER - Australian CCR tribute band was created to be the swampy no frills version of Creedence that epitomizes their sound and groove. Performing all of your favourite CCR hits including Bad Moon Rising, Have You Ever Seen The Rain, Proud Mary, Down On The Corner, Lookin’ Out My Back Door plus other classics. Green River is an energetic tribute band with amazing attention to detail. These lads deliver playing the soundtrack of your life!

The Bridgeway hotel, Friday 12th November. A show not too be missed. Tickets $35 plus bf from Oztix