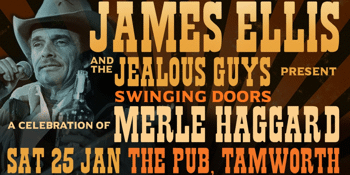 The Pub (Tamworth, NSW)
Saturday, 25 January 2020 6:00 pm
5 days away
All Ages (minors must be accompanied by Guardian)
Country
Music
Festivals
Send this event to

James Ellis and the Jealous Guys are excited to bring their show, Swinging Doors - A Celebration of Merle Haggard, to the Tamworth Country Music Festival on Saturday 25 January 2019 at The Pub.

“James Ellis is at the forefront of the next generation of country music.” – Double J Radio

“On his noteworthy debut Ellis shows he can foot it with maverick and classicist contemporaries such as Daniel Romano and Zephaniah OHora.” — Rhythms Magazine

“James Ellis has his cowboy boots firmly in Melbourne and his heart in Austin Texas … and as good country music should, he's guaranteed to have you two steppin’ or cryin’ tears in your beer.” – Denise Hylands (Twang on 3RRR FM)

“James Ellis and the Jealous Guys, a rollicking, rag-tag collection of Melbourne veterans … owes as much to the honkytonk homeliness of Jerry Lee and country classicism of Merle Haggard as it does to anything of a more modernist bent.” – Rhythms magazine