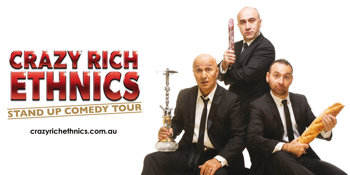 The jam-packed show will include the original “wog” himself George Kapiniaris, who first co-created the “Ethnic Shows” and concepts and was the star of “Acropolis Now”.  George also has a huge body of work including a number of feature films, sit-coms, starring in musical theatre and is an award-winning actor and stand up comedian.

James Liotta is a performer on the rise.  With over twenty years of experience, James has been involved in some of the biggest and most successful productions Australia has ever seen.  He has a growing following on social media and his videos and characters are hugely popular.  His characters are very memorable and relatable regardless of your background.  James is a stunning performer with incredible energy and a stand-up comedian you should not miss in “Crazy Rich Ethnics”

TAHIR, makes up the third member of this killer show and lineup.  Tahir has incredible credits including a number of feature films, sit-coms such as “Fat Pizza” and “Housos”, co-created “Here Come The Habibs” and has appeared on countless shows, galas, panels and was most recently seen on “I’m a Celebrity Get Me Out Of Here”.  Tahir is a dynamic performer, logie winning actor and award winning stand up comedian who is not to be missed in Crazy Rich Ethnics..