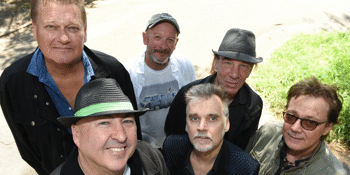 Moving Pictures began in 1979. Within a year, they had made their reputation as one of the best live acts in Sydney. They were all superb musicians, and in Alex Smith, they had an exceptional vocalist and world class front man. In 1981, they recorded their debut album, “Days Of Innocence”, including the smash hit “What About Me”, both of which went to the top on the charts. The band enjoyed several very successful years before the pressure of relentless touring took its toll, and, in 1987, they split. Alex went to London to with Harry Vanda and George Young, and spent many years working with some all-time rock legends. Garry formed the chart-topping band, “1927”, while Ian, Mark and Charlie are the A-list of Australia’s session musicians.

In 2011, Moving Pictures reformed for a 30th anniversary tour, which culminated in a sensational sold out show at Sydney’s State Theatre, where the band’s powerhouse set shook the foundations. Every year since, they have toured Australia to rave reviews. The band are the best they have ever been.

Early in 2018, Moving Pictures were part of the sold out National Red Hot Summer Tour, where they played a killer set of all their hits, plus some awesome covers of rock classics.