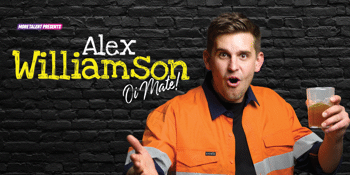 Beach House Hotel, Scarness (Scarness, QLD)
Tuesday, 24 November 2020 7:00 PM
137 days away
18 Plus
Comedy
Send this event to
The Loosest Aussie Bloke, Alex Williamson is back with another crushing hour of pure, uncut comedy platinum.  A comedy festival isn’t complete without an aggressive Australian telling jokes in a hilariously threatening manner, baring all with the type of truth usually reserved for therapy sessions. Enter the mind of Shooter if you dare - as he breaks down walls with his bare hands (metaphorical bricks on the walls of social norms, he’s not doing house reno’s).

Since starting out in stand-up 2007 this country South Australian lad has made a global name for himself – from living in LA back in the day, where he was somehow entrusted to attend events and interview A-List celebs on the red carpet for FOX FM, to being flown back there some ten years later to shoot with comedy legend Sacha Baron Cohen to starring in a zombie movie with Jim Jefferies and selling out Australian, Edinburgh Fringe and New Zealand seasons year after year.