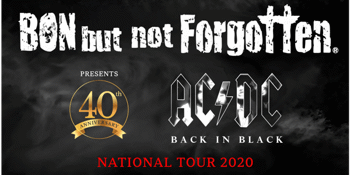 Bon But Not Forgotten


Released on 25 July 1980, “Back In Black” is arguably one of hard rock’s most influential records.
It was AC/DC’s seventh studio album – their sixth internationally – and an album that was an unprecedented success for the band.
The Album is currently the second highest selling Album in History with over 40 Million Sales, closely following Michael Jacksons Thriller.
2020 marks forty years since the album’s release and was an album of significance for the band as it was the first full length following the death of Bon Scott with the band recruiting vocalist Brian Johnson.  The album was an ode to Bon Scott.
Celebrating its release, Bon But Not Forgotten assembles some of the world’s greatest rockers to perform the iconic album in its entirety and to pay tribute to the legend behind one of the world's greatest bands, AC/DC, and their iconic singer Bon Scott who also celebrates his Birthday on July 9th.
Featuring Simon Wright (Ex-AC/DC), James Morley (Angels/Choirboys) and Cynthia Gallie (Let There Be Rock Orchestrated) plus special guests Skenie (The Poor).This is a show AC/DC fans don’t want to miss!