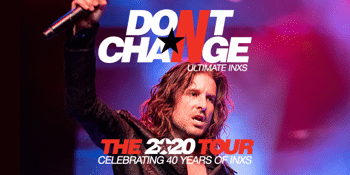 On Saturday 12 June, we take things back with a very special show to relive when INXS performed at the Long Jetty Hotel 38 years ago, on Friday 11 June 1982

Considered to be the most authentic INXS touring tribute productions, fans have been partying to XS with Don’t Change at shows across the country.

Featuring a line-up of 6 exceptional musicians led by the charismatic front man Blair Dwyer, Don’t Change – Ultimate INXS perform INXS’s 1982 Long Jetty Hotel set, plus all the biggest INXS hits across three decades with tracks such as Never Tear Us Apart, Original Sin, Don’t Change, Listen Like Thieves, Burn for You, Need You Tonight, Pretty Vegas, I Send a Message, Suicide Blonde, Devil Inside, and many, many more!