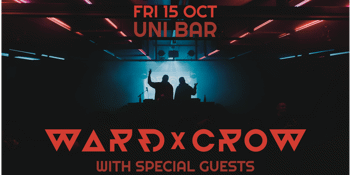 With specials guests
Uni Bar Hobart (Sandy Bay, TAS)
Friday, 15 October 2021 7:30 pm
19 days away
18 Plus
Australian Artists
Electronic
Drum & Bass
Dance
House
Send this event to
WARD X CROW – Orignally an idea that came about after a back to back set at a party in 2020. WARD (Charles Ward) & CROW (Sam Ross) came to a realisation that their styles combined made for something beyond what either could offer on their own.

After years of DJing at private parties and shying away from the club scene, WARD was given his first real opportunity at the start of 2020 when he was asked to support Golden Features & The Presets. When he was asked back, this time to support Hayden James, WARD decided to bring the duo to life and perform back to back with CROW. The response was overwhelming and the boys found themselves booked as support for What So Not at two separate shows the following weekend.

The two are now committed to performing together and have been doing so, upon request, at different parties around Hobart. They were also the main support act for Godlands in April and What So Not again in August.

In their sets WARD X CROW aim to take the crowd on a journey through the latest dance music, encompassing all types of house music, that will eventually lead you into the heavier genres of drum & bass, trap and dubstep.

Due to current COVID19 restrictions, limited dancing numbers are allowed.
This event will comply with all Covid-19 restrictions in Tasmania. Due to the changing nature of restrictions at the moment further details will be released at a later date. Be prepared to abide by any precautions necessary.