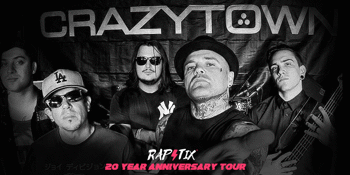 Best known for their No.1 hit song ‘Butterfly’ rap rockers Crazy Town have announced an Australian tour to celebrate the 20th Anniversary of their platinum-selling debut album ‘The Gift Of Game’.

When the new millennium arrived the music industry was in the midst of a new music revolution. The free delivery via shared files online created a new “outlaw” brand, that would prove instrumental in the way music would be not just delivered but created.

One of the break-out bands to not just embrace but help shift the tectonic plates of the music industry was Crazy Town. As one of the first hybrid brands, they brought a new ball into the game.

Equal parts urban and suburban, Chevrolet and Bentley, they rolled onto the music scene with a slow build that erupted when a ‘Butterfly’ entered the room. The two founding members, Seth Binzer and Bret Mazur were introduced to each other by WILL I AM of the Black Eyed Peas. Binzer brought in his long-time friend DJ AM and Crazy Town was born.

The band was all the buzz in the industry, the talk of LA. Crazy Town-mania created a classic Hollywood record label bidding war in which Columbia Records ultimately won.

It was the Columbia/Sony worldwide reach which appealed the most to Crazy Town and that reach had them touring the world and eventually garnered them a number 1 record in more than 15 countries, and selling more than 6 million copies of their first album, ‘The Gift Of Game.’ The success of their worldwide smash hit Butterfly in 2001 was inescapable and reached iconic status.

Early bird tickets on sale now from $45 from & are strictly limited.