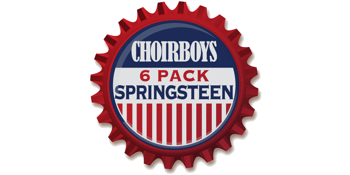 As we unpack another Choirboys 6 pack we learn from Mark Gable it really is. Bruce Springsteen has captured it again, again and again. Both with the live performance and in song. Emoting at the most fundamental level – Im confused, Im lost, where do I belong….argh somebody help me! “It wasn’t till I saw Bruce on TV for the first time, performing a live version of Rosalita that my brain snapped” – said Gable. “This is it man! Bruce wasn’t just good, he was pure inspiration. And still is today!” Gable recalls Choirboys in the early 80s, were doing ‘Born to Run’ in a place called The Manzil Room, the coolest place in town. Springsteen at this point is from the 70s and had fallen off the cool radar. Still we did this song, not because it was cool or uncool but because it was at the core of what Choirboys were and where we were from……. the other side of the track.

‘everybodys got a hungry heart’ ‘Man Im just tired and bored with myself’ ‘got a wife and friend in Baltimore Jack, went out for a ride and never went back’ 'Cause tramps like us, baby, we were born to run’

Springsteen is street. But not in a cliched hair flick cock rock format…..and not in an over driven formulaic and crafted pop sensation. Bruce lived and breathed IT and he wrote about IT in a way that everyone could relate to. He elevated us from our dreary Monday to Friday existence and took us to a place full of wonder and amazement. A place we could revisit any time……..any time we heard his songs again.

So we join Choirboys on the other side of the track as they travel down the road of inspiration with a 6 pack of Bruce Springsteen - just begging to be torn apart and brought back to life as Australian pub rock anthems. Choirboys doing Bruce Springsteen…….making rock n roll great again!