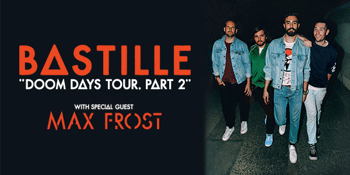 Frontier Touring is excited to announce Max Frost, Evie Irie, and Jupiter Project as special guests for the Australian and New Zealand legs of Bastille’s Doom Days Tour, Part 2 in January and February 2020. Max Frost will join Bastille at all Australian shows, with Evie Irie also appearing in Sydney and Melbourne, while Jupiter Project will kick off proceedings in Auckland.

The tour kicks off in Auckland on Thursday 23 January at Spark Arena, before heading to Sydney’s Hordern Pavilion on Monday 27 January, Melbourne’s Sidney Myer Music Bowl on Thursday 30 January, The Gov in Adelaide on Sunday 2 February, and finishing up at Metropolis Fremantle in Perth on Tuesday 4 February. This will be fans’ first chance to hear Bastille’s third studio album Doom Days live.

Performing at all Australian shows is Texan Max Frost. Frost has come a long way his first release, viral 2013 hit ‘White Lies’, which took out the #42 spot in triple j Hottest 100. Two EPs and 2016’s genre-blending ‘Adderall’ placed him firmly on the map, before a move to LA in 2017 inspired debut album Gold Rush. Released last year, the LP features the Network 10 and Google Play theme ‘Good Morning’, plus ‘Eleven Days’, ‘Money Problems’ and new single ‘Perfect Man’. He’s toured with Twenty One Pilots, Panic! At The Disco and Gary Clark Jr, earning a reputation for high energy, infectious performances that are a true one-man-show, with Frost playing all instruments.

Joining Bastille and Max Frost in Sydney and Melbourne is 16-year-old singer-songwriter Evie Irie. The Sydney local released debut EP 5 Weeks In LA in July, referencing five weeks in Los Angeles that changed her life. They fell during a year-long stint in the US in the pursuit of songwriting success, after her parents backed her decision to put school on hold and chase her musical dreams. From that time came ‘Bitter’, ‘Stupid Things’ and ‘The Optimist’, proof of huge things to come from this young talent.

Stepping up in their hometown of Auckland is Jupiter Project, aka Gavin Correia and Marty Rich. Their 2014 single with Jetski Safari, ‘With You (feat. Helen Corry)’ went Gold in NZ and has accumulated more than 8 million streams worldwide. The duo’s follow-up track ‘Temporary Love’  took them to #1 on the NZ charts, which was backed up by 2018’s ‘Show Love’, a collab with fellow Kiwi SYSYI, and their most recent release, ‘Summer Rollin (feat. Ryan Enzed)’. No stranger to the airwaves with their Saturday night mix show on iHeartRadio and ZM, they’re also regulars on the festival circuit and have opened for Flume, Major Lazer, and DJ Snake.

Don’t miss your chance to see Bastille this summer!