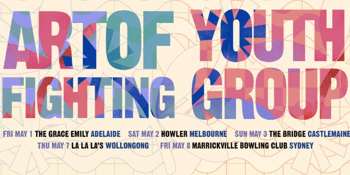 The Grace Emily Hotel (Adelaide, SA)
Friday, 20 November 2020 7:00 PM
102 days away
18 Plus
Music
Send this event to
Two much-loved titans of Australia’s indie rock scene, Youth Group and Art Of Fighting, are coming together for a co-headline tour this May. With these two bands, a co-headline tour makes perfect sense. Not only did both bands make their names in the mid-00s, playing thoughtful and dynamic guitar music, winning hearts of fans and critics alike, but they both returned last year with their first new music in over a decade: Art Of Fighting with Luna Low and Youth Group with Australian Halloween.

Youth Group’s Toby Martin says of the tour, “I really feel simpatico with Art Of Fighting. Like us, they too have released a new album after a few years away and I can't imagine better touring partners! We've been long-time admirers of the band and even played a few shows with them back in the mid-2000s. We've always loved their hushed intensity, and on top of that, they are a lovely bunch of people. I’m really excited to be touring with them!”

These shows will see each band perform a full hour long set and dive deep into their respective back catalogues, playing songs new and old, well-known along with cult faves. It’s a rare opportunity to see these two acclaimed acts on the same bill, so don’t miss your chance!