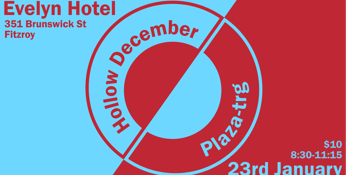 The Evelyn Hotel (Fitzroy, VIC)
Thursday, 23 January 2020 8:00 PM
2 days away
18 Plus
Australian Artists
Indie
Send this event to
Yes, it's happening! A Hollow December, Plaza-trg double headline at the Evelyn!

You might have noticed that it's been a while since the last Plaza gig but they're back at it now that a certain drummer boy has discovered himself overseas and is back in the country. They'll be providing their usual blend of catchy indie pop, laden with infectious riffs that will get you hooked.

Hollow December will be turning it up a bit, bringing their alt-rock sound to the Evelyn band room for the first time. Expect the unexpected when a violin goes head to head against a wall of synths and a very loud guitar.

It's been a while since these two friends shared a stage, and it's likely to be a while until it happens again so come and have a boog:)