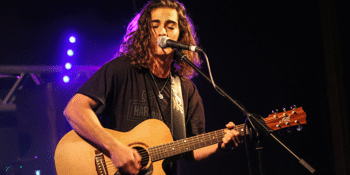 with Lily Papas & Harry J Hart
Miami Marketta, Gold Coast (Miami, QLD)
Saturday, 26 September 2020 6:00 PM
5 days away
18 Plus
Acoustic
Folk
Australian Artists
Send this event to
Far from his family home on a mango and cattle farm in rural NQ, René Le Feuvre has made leaps and bounds after relocating to the Gold Coast at just 17 to originally pursue a career in AFL with the Gold Coast Suns.

After busking at local markets, René found his true passion - music, and began his journey as an original artist.
From performing on National TV on The Voice AU to performing at iconic stages in Nashville, TN, René began writing and releasing his own music gaining traction not only in Australia but also in the USA and UK.

Earlier this year, René was invited to perform during SXSW festival in Austin Texas, an opportunity that was cut short by the pandemic, which leads us to now - a six track EP Launch in September.

Having been anything but idle during these Covid-19 times, René instead went back to his roots to Giru, NQ to spend time writing and honing in on his craft, planning his show and making the most of the “extra time”.
Pulling together a 4-piece band of young talented musicians, the next few months will define René Le Feuvre as he unfolds his artistry.