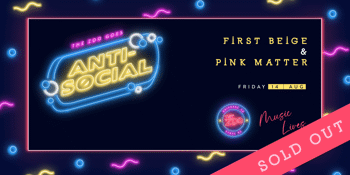 WELCOME BACK LIVE MUSIC!
Grab your ticket and help keep your local artists and venues alive.
LIMITED TO 100 TICKETS SO GET IN QUICK
**** If you are planning on coming in a group of 4 or more, please arrive at the same time so you can be wrist-banded as a group ***
The launch of The Zoo’s Anti-Social series is centred around embracing change and adapting to new thought process while focusing on and supporting local and grassroots artists.
We are stoked to announce
Pink Matter & First Beige

~ALL ARTIST PROFITS WILL BE DONATED TO Sisters Inside Inc~
FIRST BEIGE
Conceived in Brisbane, First Beige draws upon driving disco grooves, sweeping synths and irresistible vocal hooks to craft a full-bodied sonic spectacular guaranteed to get any crowd grooving. An infectious live act taking inspiration from the likes of Flying Lotus, Parcels and Kaytranada; the six-piece have continued to solidify themselves as one of the rawest, most energetic and vibrant live acts to come out of Brisbane in recent years.
Since their inception, First Beige has come a long way from a bedroom recording project of founding member David Versace in 2016. Four years, two EP’s, two East Coast tours and a QLD Music Award nomination later and the Brisbane 6-piece continue to impress crowds nationwide.
Their sets at BIGSOUND Music Festival and Conference 2019 were highly acclaimed, with Deafen County saying, “judging by the movement in the crowd, everyone is in favour of their funk” and Scenestr saying, “The set has everything, from dreamy, drawn-out guitar solos, to snappy snares, to a triangle appearance”.
The band have hit the ground running in 2020, opening Brisbane’s Laneway festival, announcing appearances at Party In The Paddock, A Festival Called Panama, Nine Lives and shows in Wollongong, Sydney, Yamba and the Gold Coast. Following up from their second EP ‘Mirrors’, First Beige are already hard at work in the studio, continuously evolving their sound with the same core objective to get feet moving and faces smiling.
PINK MATTER
After its members met through university, the all-female three-piece have captivated the Brisbane music scene. Their music is a modern, twisted take on the neo-soul/urban genre, with notable hints of KAYTRANADA, The Internet and Koi Child. Their debut 5 track EP Human Error (grammy-nominated engineer/producer Nick Herrera) was released in August 2018, and the group have since then earned support slots for Unknown Mortal Orchestra, Harvey Sutherland and The Internet.
Tickets prices are broken down into two parts -
1. The Ticket Price
All money from tickets go directly to the artists.
2. The $40 Minimum Venue Spend
While the capacity of venues remains restricted to 100 people, implementing a minimum spend within the venue affords a small security blanket for the venue and all its employees to be able to open the doors.
$40 of venue credits will be given to ticket holders at the door upon entry
These credits will entitle each ticket holder to a redemption in the venue on the night.
Venue credits can be used for alcoholic & non alcoholic beverages and zoo crew merch.
SAFETY
At all times we will be working within approved COVID SAFE PLANS, Restrictions & guidelines, while trying to preserve an authentic live music experience.
For concerns or queries on safety please reach out to the venue direct for information on our COVID SAFE PLANS and measures for ticket holders, artists and staff.