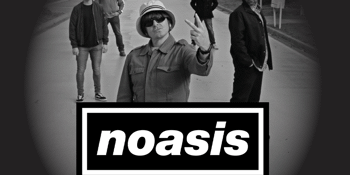 with Lawson Doyle (Sunflower)
Coolangatta Hotel (Coolangatta, Gold Coast, QLD)
Saturday, 22 May 2021 8:00 pm
15 days away
18 Plus
Rock
Alternative
Send this event to
EVENT POSTPONED to SATURDAY 22 MAY - all tickets are valid for the new event

Originally formed in England, NOASIS were born during the 90’s in the midst and mayhem of Brit Pop performing shows across the UK for many years in clubs, pubs and festivals building their reputation as one of England’s most authentic Oasis tribute acts.

In 2015, lead singer Darren Spiby decided to bring Noasis to Australia permanently. Now based in Adelaide and with a new line up, “they truly bring the spirit of Oasis to the stage with thumping backbeats and wall of sound that are complimented perfectly by attitude, style and in your face rock ‘n’ roll like it was originally intended”.

As they gear up for a huge Australian tour in 2021, see the boys perform all the anthems that defined an entire generation including Roll with It, Supersonic, Cigarettes & Alcohol, Morning Glory, Go Let It Out, Some Might Say, Gas Panic, Hindu Times, Don’t Look Back in Anger, Wonderwall and more!

Whether you got to see Oasis 50 times or never got around to it, this show captures the joy and magic of what it was to witness one of England’s greatest rock bands.
So, grab your mates, bucket hats, shades and get set to go OFF for a show that promises to be the closest thing to the real thing… and an incredible night out. C’mon, you know.
“As a huge Oasis fan, I can honestly say if you squint, you won’t be able to tell the difference between this great tribute act and the originals… phenomenal and blistering!”.