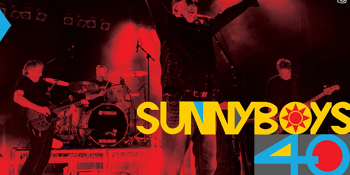 The legendary Sunnyboys hit the road this February to celebrate the release of Sunnyboys 40, a brand new 8-track album that comprises the first ever re-release of the band’s iconic 1980 debut 7” including the original version of Alone With You plus 4 new recordings culled from the archives of chief songwriter Jeremy Oxley.

And what better way to celebrate both the new release and the 40th anniversary than by doing what Sunnyboys do best - play live! And so Sunnyboys hit the east coast this February including first time ever shows in Lorne and for Sydney’s Twilights @ Taronga.