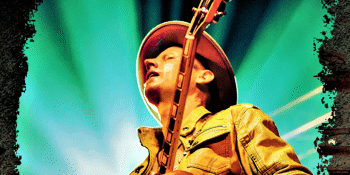 Badlands Bar (PERTH, WA)
Friday, 8 October 2021 8:00 pm
19 days away
18 Plus
Blues
Rock
Send this event to
Bad A$$ Blues brings you the best of rockin, stompin, howlin blues that Perth has to offer.  Featuring the incredible Matty T Wall band, Peta Lee & The Vibrolators and Lightning Jack.
Mate, on October 8, sure to get your blood pumping and your feet moving.

Matty T Wall: From sweet blues to gritty stomping blues beats, and now having seven nominations in the prestigious Independent Blues Awards in the USA and three back-to-back Number One Australian Blues albums, this is an artist you do not want to miss, as Matty T Wall returns to the stage more motivated and addictively electric than ever with two rhythm legends of the scene, Ric Whittle and Leigh Miller.
This is in no small part due to the worldwide acclaim that was brought upon Transpacific Blues Vol. 1, the collaborative album that saw Wall duetting with US blues guitar greats such as Kid Ramos, Walter Trout, Eric Gales, Kirk Fletcher and fellow West Australian, Dave Hole. The album was released internationally via Memphis label Select-O-Hits and by Only Blues Music in Australia.
Transpacific Blues Vol. 1 was met with rave reviews around the world, hitting the Living Blues chart in the US and making the grade in none other than Joe Bonamassa’s ‘Cutting Edge Blues – Best Of 2019’ Spotify playlist. The great man of blues guitar handpicked Wall’s run through Hi Heel Sneakers with Eric Gales. For Wall, it’s a great shot in the arm.
"I was very happy to be a part of this record. I'm, sure everyone will love this. The guy is a picker"-Eric Gales

"I’ve watched as he's gained in stature to become a major league blues-rocker and was pleased to be asked to contribute towards his new album."-Dave Hole

“Matty T Wall, an extraordinary blues-rock guitar player, singer, songwriter. Echoes & elements of rock from the 60’s, but Wall’s voice hurls it into the 21st century, his dazzling guitar licks and solos not of this world. Wall is entitled to a little swagger—he has the chops to pull it off. Extraordinary guitar player. Jazz flavors, soul. Gritty blues-rock, rock & roll, with outstanding musicianship.”
– Martine Ehrenclou, Rock and Blues Muse, Los Angeles USA, Sept 2018

Peta Lee & The Vibrolators: Those Wild West Coast Hipsters Of The Blues – The Vibrolators – are back, this time with a special appearance by the wonderful Miss Peta Lee. Miss Peta Lee is WA’s premier exponent of the raw Rhythm and Blues vocal styles pioneered by many female singers in the 1940s and 50s.
The Vibrolators first appeared on the national touring circuit in 1997 and throughout the last two decades have taken their quirky 1950’s flavoured Blues and RnB to all corners of the country. It’s no wonder they have become one of Australia’s much loved blues bands having performing in all major cities and at most national blues festivals.
Amongst others, The Vibrolators have appeared with and opened for:
Little Charlie and the Nightcats • Fiona Boyes • Lil’ Fi • Chris Wilson • Eugene Bridges • Lynwood Slim • Luke Steele • Doc Span • Kristina Olsen • The Blues Band • Jimmy Thackery • Alison Penney • Ivan Zar • The Blues Band • Paul Jones • Tommy Emmanuel • Kate Ceberano • The Black Sorrows • JoJoZep and the Falcons • Paul Jones
The Vibrolators have four CD releases under their belt with the latest “The Vibrolators featuring Miss Peta Lee” launched in May this year. The band celebrates its 20th anniversary in January 2017 with all original members still on board … no mean feat in this business!
If seriously swinging grooves and a sultry, sassy RnB vocal floats your boat, well … you are on the right track with The Vibrolators featuring Miss Peta Lee … these Perth boys and girls are yet again ready to take you for an exhilarating rollercoaster ride of all things Blue.

Lightning Jack: Growing up on a solid diet of southern rock & true blue Aussie bred bands in a home where music and instruments were a major part of every day life. Being heavily influenced by artists such as; Lynyrd Skynyrd, Lead Belly, Hound Dog Taylor & his own Father. Having been taught guitar by Ori Rossi(who has also mentored artists by the likes of John Butler and IOTA) Jack began exploring his love for music recording and performing by the age of 12.
Lightnin Jack has now been touring Australia for 10 years developing his trademark raw, husky, bluesy sound, incorporating old & new with his rare one of a kind sound consisting of his multiple guitars and percussion instruments he truly is a one man travelling band. With the ability to produce and create such a diverse range of sounds, Lightnin Jack has been sought out by many a musician and band across a wide range of genres and locations throughout Australia of which he has performed and produced with.
Throughout his musical career Jack has supported and performed on stage with acts such as The Angels, Ash Grunwald, Blue Shaddy, Matt Gresham and The Southern River Band, as well as playing at multiple festivals such as Byron Bay Blues Festival, Tamworth Country Music Festival & Blues at Bridgetown Festival doing his solo work as well as playing guitar in other outfits.
Having recently supported Tony Joe White on his West coast tour, Jack has released his third studio album ‘South West Sessions’. Lightnin Jack has made his way around the country sharing his music far and wide forming his reputation as a genuine travelling man.

Get your tickets early for this show, it’s gonna be a big’un.
Bad A$$ Blues at the Badlands Bar.   BOOK NOW.