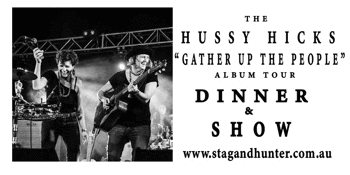 2nd Show announcement, Due to popular demand Julz, Lisa, Tracy, and Al will be playing a second intimate show for us. Your ticket will include your  meal and a seat were you can dance to you hearts content. We are a COVID Safe venue and will ensure the strictest complince of the health orders of the day

One of Australia’s best live blues ‘n’ roots bands, Hussy Hicks are a tour de force featuring powerhouse vocalist, Leesa Gentz and award-winning guitarist, Julz Parker. Prolific and accomplished musicians, Hussy Hicks have honed their sonic dexterity over the past 13 years with six studio albums, multiple industry awards and more than 1,000 live shows under their belts, from Australia’s biggest blues, roots and folk festivals to 15 international tours, which now sell out across Europe.
Never ones to shy away from activism, social commentary or using their voices for the greater good, Hussy Hicks follow up their 2017 Album of the Year winning release with their new 6th studio album, Gather Up The People out on 24 July, which looks at many of the  issues at the forefront of the global consciousness this year, calling for a future without sexism, racism, homophobia and xenophobia, but most importantly, without fear.
Join Julz and Leesa for an intimate dinner and show in one of their favourite venue's