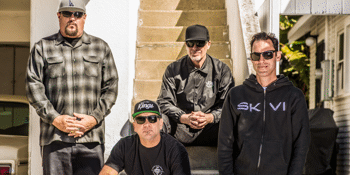 Hermosa Beach legends PENNYWISE have today announced an Australian tour, where for the first time ever the So Cal punk rock band will be performing their album ‘Straight Ahead’ in its entirety plus fan favourites.

To celebrate the album’s 20th anniversary Pennywise will be performing all songs from the album and bringing with them long-time touring partners from California, STRUNG OUT and Swedish punk rockers NO FUN AT ALL, giving their Australian fans what will no doubt be the punk rock tour of the year.

Tickets for all shows go on sale at 11am Friday, October 4.

Fans can secure tickets first during the artist pre-sale beginning 10am Wednesday, October 2.

Formed in the South Bay of Los Angeles, a neighbourhood with a rich punk rock history, Pennywise began in 1988. The band would go on to amass an international following through relentless touring and a melodic high energy sound merging melodic surf punk, blistering hardcore and the classic punk of their youth. The group has solidified their place in punk history with songs like the raging ‘Fuck Authority’, ‘Alien’, and the band’s legendary ode to brotherhood and departed friends ‘Bro Hymn’.

If you listened to “Songs Of Armour And Devotion”, the new album from punk rock band Strung Out, you probably wouldn’t guess that the California band has been together for almost 30 years – such is the intensity and fresh energy of these 13 songs. Produced by Cameron Webb, who was behind the helm of 2009’s “Agents Of The Underground”, it’s a record that brims with the same ferocious fire the band had at the very start of its career when frontman Jason Cruz was still a teenager, but which also demonstrates how far the California five-piece have evolved as songwriters, musicians and people.

Since the debut release of “Vision” in 1993, Sweden’s premier hardcore pop-punkers No Fun At All have grown into a tight, intensive and frantic mean killing machine. Something which has been proven on hard-exercised tours all across the globe. The band paved the way for Swedish punk and hardcore while being hailed, praised and ‘adopted’ in Southern California – the #1 stronghold for melodic punk.