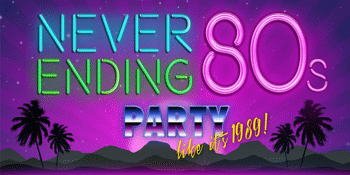 Dunsborough Tavern (Dunsborough, WA)
Friday, 21 May 2021 8:00 pm
5 days away
18 Plus
Music
POP
Punk
Rock
Send this event to
There’s no other decade like the 80’s. It was THE era of BIG HAIR, BIG HITS and BIG FUN. NEVER ENDING 80’s take you back to Party Like Its 1989 with a night packed full of the biggest hits by the biggest artists ever. The Decade that was the 80s was awesome and with that awesome Decade came with THE BEST soundtrack