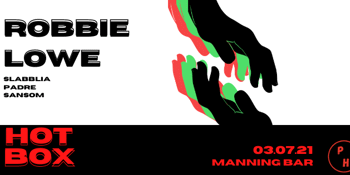 This event will give the audience the chance to get up close and personal with the DJs, as the captains of the night will be in the middle of the crowd providing the tunes.
The event will kick off at 9pm sharp and finish at 3am with the incredible Robbie Lowe.
About the men behind the 1s & 2s

Robbie Lowe
A true vibe master, Robbie Lowe’s love for playing timeless records remains as strong as the day he first jumped on the turntables at a house party back in 1993.

From the legendary early morning Spice Cellar sets and ‘all night long’ marathons at Civic Underground and S.A.S.H, to rocking the Electric Gardens Festival main stage after Armand Van Helden, Robbie’s accolades are many. He has warmed up floors for some of the biggest names in the business and in 2019 was personally selected by Sasha and John Digweed as warm-up DJ for their first Australian shows together in 13 years.

Across the seas, he has played and toured regularly in the USA, UK, China, Indonesia and Fiji. In the mix series realm, Robbie has contributed to the esteemed Balance podcast, John Digweed’s Transitions radio show and released a compilation on the revered Ministry Of Sound label. He has also produced a handful of celebrated EPs, including collaborations with fellow Sydneysider Matt Rowan. Their latest release, ‘Luminary’, drops in June 2020.
Unfazed by his standing in the scene, Robbie continues to hone his craft with a humble and quiet determination. You can tell by the perpetual smile planted across his face – he’s just a guy that loves to play music. It’s as simple as that.


Sansom
Hailing from the UK and residing in Sydney since 2014, SANSOM is well known in the underground scene for his groovy, rolling basslines.
He has always been highly music-orientated, growing up with his Grandad teaching him how to play the drums at the age of 8. He now has a passion for the arts of all House, Minimal and Garage, always managing to keep the crowd jumping!
Having played at some of the top clubs in Sydney, including S.A.S.H, Club 77, Goodbar and Sly Fox (where he supported TOMAN), he is a reputable artist who has made a name for himself through his distinctive style and contagious energy that he brings to the dancefloor.

Slabblia
This guy has deep roots in Sydney's music scene. This musical genius has put on some class events over the years in the underground scene throughout Sydney. His music style: rolling/clubby/deep/minimal/ house. This man will have your feet stomping and your heart pumping all night long.

Padre
A Sydney based DJ/producer loves anything that will get your two-step out on the dance floor. This young guy started off in the Gong playing at local house parties to moving to Sydney this year and playing at bars such as Stanley on Stanleys, Websters Bar, Corner Bar Bondi, Oxford Underground and plenty of boat parties in-between. His minimal groove style of music is intoxicating, and will not be something you'd want to miss.