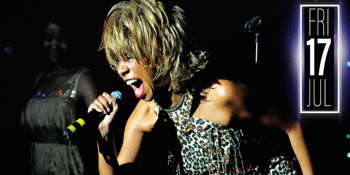 CBD LIVE (Southport) (Southport, QLD)
Friday, 17 July 2020 8:00 pm
144 days away
All Ages
Rock
Soul
POP
Dance
Send this event to
Be prepared to stand in your seats as Rebecca O’Connor delivers her flawless renditions of the Queen of Rock-n Roll, Tina Turner’s greatest hits.
This Internationally acclaimed performer will again grace the shores of Australia hot on the heels of her recent “standing room only” sold-out shows in Ireland, the United Kingdom and South Africa, where audiences were mesmerized with her performances.
Tina Turner is one of the greatest live performers in music history. Her career has spanned 50 years in which she has received numerous awards including 8 Grammy’s. Her combines album and single sales total over 180 million copies worldwide and selling more concert tickets than any other solo music performer in history, her achievements have led music fans and fellow artists worldwide to call her “The Queen of Rock’n’Roll.
Don’t miss your chance to see Rebecca rock the stage with her wild hair, jaw-dropping dresses, red lipstick and stiletto heels doing the undisputed Queen of Rock’n’Roll pure justice in a performance that can only be described as “Simply the Best”.
In the words of Tina Turner… “Rebecca is so good, it’s scary…If I had her energy, I would still be touring today.”
‘This show is way beyond a tribute act. Rebecca is an amazing performer and vocalist. A night you’ll never forget’ – Mick Fleetwood (Fleetwood Mac)