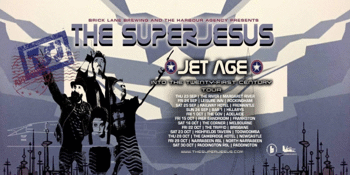 'JET AGE into the 21st CENTURY with THE SUPERJESUS.'

Anyone growing up with Australian music in the 90’s would be familiar with the band The Superjesus.

Their first record Sumo soared onto the scene with a mighty thud, landing firmly at No. 2 on the Aria album charts . Closely followed up by the platinum selling chart topper Jet Age, sporting the hits ‘Gravity’, ‘Secret Agent Man’, ‘Enough To Know’ and ‘ Second Sun’.

20 Years later the band are ready to Jetset into the future with their double decade anniversary celebration performance, JET AGE into the 21st CENTURY.

This promises to be an amazing journey , travelling through time to present the Jet Age album re vamped for a new generation. The show will span over 2 sets consisting of Jet Age in it’s entirety followed by a greatest hits set.

After a well earned break in 2020 the band are firing on all guns and ready to break out of the stands with all the energy fans have grown to be accustomed to from a Superjesus performance. With the amount of hits on this record, this will be a show not to be missed!

For all THE SUPERJESUS info, sounds and tour dates visit:
www.thesuperjesus.com