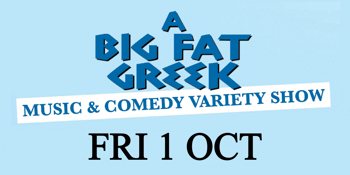 Featuring: George Kapiniaris, Maria Maroulis, Costas Sakellaris, Tony Nikolakopoulos & Johnny Kats
Shoppingtown Hotel (Doncaster, VIC)
Friday, 1 October 2021 8:00 pm
11 days away
18 Plus
Comedy
Cabaret
Music
Send this event to
‘Big Fat Greek Comedy Show’ was first put on at The Arkaba in Adelaide. The Show was Sold Out and it was a huge success with everyone raving about it!

It was fun, funny, musical, a little romantic, and captivating with the blend of music & comedy.

Tickets are strictly limited due to Covid Number Restrictions so BOOK EARLY!